A few years ago I heard about some old trucks for sale from a friend who lives near Carnation Washington. His neighbor was an old timer who lived alone, off the grid. When he started having trouble surviving on his own, his family took care of him and put his stuff and the property up for sale. The old guy had an awesome collection of vintage tractors, heavy equipment, trucks, and other odd contraptions scattered across the property. I originally went up there to check out a pair of Nissan Patrols, but the old Power Wagon really caught my attention.

According to his daughter and the neighbor, this was his last running vehicle. While he was out gathering fire wood, he broke a rear axleshaft, then winched it up to the top of the hill to rot. I made an offer for the truck (paid 800) and hauled it home.


I originally wanted to restore the truck as a family project with the kids. But when I got it home and really started to look at it, I realized it was better as a parts donor than a project. I'm sure some of you are offended that I cut up a Power Wagon, but you'll have to take my word that it was a rotten piece of junk. Beside the dented up cab with a rusted out floor, every mechanical part was worn out. It looked way better in pictures than in reality.


Meanwhile, bad thoughts were entering my mind. Mostly inspired by Don Brown's Willys truck from a while back, and a pile of Cummins swap parts I had in the garage. A plan started to come together.


I decided to part out the Power Wagon, but kept the sheet metal. The parts sold more than paid for the original cost of the truck, and hopefully are keeping a few more old Dodges running.

Originally I had something like this in mind. Must be from before I decided to use the 12 valve.


I started by attacking the cab. Because I was curious and wanted to keep the weight down, I weighed some of the heavier items. Here's the cab minus doors and seat.


Some sweet wiring. check out the 120 volt light switches.


Hard to tell from this picture, but the entire rear cab wall had separated from the floor.


Cab up on the fab table for surgery. Notice the driver side not touching due to floor being racked/rotten.

Joined Mar 13, 2009
·
186 Posts
I knew I wanted to eliminate the crappy old floor, and shorten the cab a bit, so I slotted out the bottom of the door openings for .120 wall 2x2 tube. I left the floor on until they were welded out to keep the cab dimensions from shifting.


The rear cab wall had been oddly repaired by overlaying the original sheet metal with another chunk of sheetmetal. I decided to cut out the original sheetmetal and tacked it to the overlay. I then strongbacked the lower section to keep some rigidity in it for when the floor was removed.


For some reason I don't have a pic the shows the door sill tubes in from the side, but you can see where they ended up in this pic of the cab being freed from the floor.

And now it sits perfectly flat.

The gutted cab without crusty floor weighed a lot less.

After I moved the parts back home, I mocked up some junk to see what I was getting myself into. I liked what I saw.

Joined Mar 13, 2009
·
186 Posts
I started the chassis design by plotting it out on graph paper. The 12 valve is huge, so I had to build around it. I wanted the engine set back into the chassis to counter some of its weight, and to allow more up travel at the front axle. Some of my original ideas I put on paper didn't work out due to packaging around an enormous engine, such as the upper links. I'll get back to that later. I decided to use a strong core for the chassis that I could jig up on my fab table at work. Because I was building it after hours, I built only the subframe so I could somewhat easily move it and hide it from the boss during the day.

Here's the start. 2 x 4 tubing for main frame rails, extending from engine mounts to behind the cab. Nothing fancy for the bends, just coped joints.


1 3/4" DOM to form the belly and eventually tie into the rear half of the truck.

Some of my early TIG work. Not real pretty, but I've gotten better(if I do say so myself).


Doubler on the coped joint.

DirtRoads;44405898 said:
All you need to go wheeling is a credit score these days
Click to expand...

Joined Apr 26, 2011
·
569 Posts
I love all these old rat crawlers popping up on here. Its a nice fresh breath of air. In before someone references a ultra 4:flipoff2:

YROC FAB. said:
I love all these old rat crawlers popping up on here. Its a nice fresh breath of air. In before someone references a ultra 4:flipoff2:
Click to expand...

Thanks and I agree, I love seeing what the creative non racer minds are bringing to the table.
► Show Full Signature
Help bring back Swartz Canyon, Join http://www.coohva.org/

Joined Apr 23, 2002
·
5,195 Posts
Thank you for taking the time to write this up and share it. Anxious to continue following.
► Show Full Signature
MNorby's Ibex remodeled buggy build thread​

I needed to get the engine and trans together for mock-up. I decided to go manual trans (I know an auto would have been better for go fast and crawl) because it fit the character of the truck better. I found a NV-4500 on Craigslist for cheap, but it needed to be rebuilt and had a broken top cover.

I've never rebuilt a manual trans before, and I was a little worried when I had it all torn down. But I had a decent manual, and it went together pretty easily. The hardest part was figuring out ways to pull the old bearings off.


Re-stacking the mainshaft with new bearings and syncros.


Along with the broken shifter tower, the bolt holes were stripped out and I didn't have the right size helicoils.


Welded a piece of aluminum flatbar over the opening, and used a 2 part epoxy to re-tap the shifter threads. It worked for a while. More on that later. 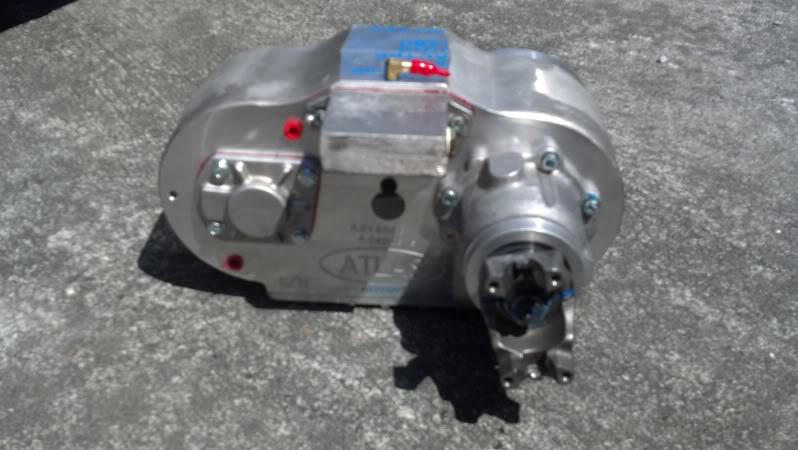 Pulled the accessories off the engine and degreased it for mock-up and eventually paint.


Checking the fit-up. Chunk o'money sitting on the bench.

Joined Mar 13, 2009
·
186 Posts
Decided to run 1 1/4" rod ends all around, and bought them from Ruffstuff. Also used their bushings for engine and trans mounts.


The 14 bolt I traded some parts for.


Another Craigslist score I stashed for later.


Meanwhile, the subframe starting to come together.

Joined Mar 13, 2009
·
186 Posts
While I was getting the engine ready for mock-up, I decided to do a few upgrades. I thought baffling the oil pan was a good idea. Cleaned and blasted the inside of the pan in the weld areas. Most of the pan is double walled, which was a bitch to weld when the oily goo between the plates heated up and blew out into the weld. Good smokey times. :smokin:


I made my own trap door baffle for the center divider. Yes, they are door hinges from the local Ace hardware. :flipoff2:


I Knew I was going to run more boost on a stock head gasket, so I upgaded the bolts. I replaced and torqued them one at a time.


Fitting the trans/t-case to build a trans mount.


This is the support for the trans and t-case. It ties the trans and T-case together. I didn't see a need to run a tail support with this, and has worked out great.


The oil pan skid plate sides are also the inside mount for the lower links. Because the Cummins pan is so wide, I needed to maximize the space to get good lower link triangulation. This the the inside link mount reinforcement doubler.


Here's what the drivetrain in the frame and the engine skid looked like. It will eventually be plated on the bottom.

Joined Mar 13, 2009
·
186 Posts
Here's a few pics of the frame as it was coming together. Still more work needed on the engine cross member and trans mount cross member. If the engine skid frame looks crooked, it is....on purpose. The drivetrain is offset to the passenger side 1".


Well, crap. I didn't see this coming. I later cut a hole through the tube for this bolt. I should have pics of this later


I love TIG. I got a lot of practice on this build, and got better at it.


Because the engine and trans will have to be installed together from the front of the truck, I made the front plate of the trans mount removable so the trans mount installed on the trans/t-case can "slide" into position. The flanges parallel to the bottom of the chassis are for mounting a removable section of skid plate. I think it will make more sense later when more of it is complete.


Also bought a set of TrailWorthy converted 8 bolts. Originally I was planning on using the 39.5 TSL's I had, which is why I went with the 16.5 wheels. I'd probably go to a lighter 17" wheel now, but it is nice having double bead locks.


While test fitting the engine, I discovered the power steering pump wouldn't fit with the engine mounts I built. On a Cummins, the steering pump (and brake vacuum pump) are gear driven on the back side of the accessory drive . So the mount had to be cut out and redone. That sucked.


All that nice work chopped out.


The reason why I had to redo the mount.